In recent weeks, Facebook has been rocked by scandal after scandal.  From quashing conservative voices on Facebook, to selling millions and millions of users data to outside apps and companies (such as Cambridge Analytica,) Facebook has been a piping hot mess lately.

In fact, Facebook has been SUCH a hot mess, that the hashtag #DeleteFacebook is still trending on every social media platform, to this day.

And then… the bottom dropped out, with a bombshell report from CNBC, that Facebook sent a doctor on a secret mission to ask hospitals to share patient data.  No kidding.  It actually happened.  According to the CNBC article,

Facebook has asked several major U.S. hospitals to share anonymized data about their patients, such as illnesses and prescription info, for a proposed research project. Facebook was intending to match it up with user data it had collected, and help the hospitals figure out which patients might need special care or treatment.

The proposal never went past the planning phases and has been put on pause after the Cambridge Analytica data leak scandal raised public concerns over how Facebook and others collect and use detailed information about Facebook users.

“This work has not progressed past the planning phase, and we have not received, shared, or analyzed anyone’s data,” a Facebook spokesperson told CNBC.

But as recently as last month, the company was talking to several health organizations, including Stanford Medical School and American College of Cardiology, about signing the data-sharing agreement.

While the data shared would obscure personally identifiable information, such as the patient’s name, Facebook proposed using a common computer science technique called “hashing” to match individuals who existed in both sets. Facebook says the data would have been used only for research conducted by the medical community.

The project could have raised new concerns about the massive amount of data Facebook collects about its users, and how this data can be used in ways users never expected.

That issue has been in the spotlight after reports that Cambridge Analytica, a political research organization that did work for Donald Trump, improperly got ahold of detailed information about Facebook users without their permission. It then tried to use this data to target political ads to them

Facebook said on Wednesday that as many as 87 million people’s data might have been shared this way. The company has recently announced new privacy policies and controls meant to restrict the type of data it collects and shares, and how that data can be used.

Led out of Building 8

The exploratory effort to share medical-related data was led by an interventional cardiologist called Freddy Abnousi, who describes his role on LinkedIn as “leading top-secret projects.” It was under the purview of Regina Dugan, the head of Facebook’s “Building 8” experiment projects group, before she left in October 2017.

Facebook’s pitch, according to two people who heard it and one who is familiar with the project, was to combine what a health system knows about its patients (such as: person has heart disease, is age 50, takes 2 medications and made 3 trips to the hospital this year) with what Facebook knows (such as: user is age 50, married with 3 kids, English isn’t a primary language, actively engages with the community by sending a lot of messages).

The project would then figure out if this combined information could improve patient care, initially with a focus on cardiovascular health. For instance, if Facebook could determine that an elderly patient doesn’t have many nearby close friends or much community support, the health system might decide to send over a nurse to check in after a major surgery.

The people declined to be named as they were asked to sign confidentiality agreements.

Health systems are notoriously careful about sharing patient health information, in part because of state and federal patient privacy laws that are designed to ensure that people’s sensitive medical information doesn’t end up in the wrong hands.

To address these privacy laws and concerns, Facebook proposed to obscure personally identifiable information, such as names, in the data being shared by both sides.

However, the company proposed using a common cryptographic technique called hashing to match individuals who were in both data sets. That way, both parties would be able to tell when a specific set of Facebook data matched up with a specific set of patient data.

The issue of patient consent did not come up in the early discussions, one of the people said. Critics have attacked Facebook in the past for doing research on users without their permission. Notably, in 2014, Facebook manipulated hundreds of thousands of people’s news feeds to study whether certain types of content made people happier or sadder. Facebook later apologized for the study.

“Consumers wouldn’t have assumed their data would be used in this way,” said Aneesh Chopra, president of a health software company specializing in patient data called CareJourney and the former White House chief technology officer.

“If Facebook moves ahead (with its plans), I would be wary of efforts that repurpose user data without explicit consent.”

When asked about the plans, Facebook provided the following statement:

“The medical industry has long understood that there are general health benefits to having a close-knit circle of family and friends. But deeper research into this link is needed to help medical professionals develop specific treatment and intervention plans that take social connection into account.”

“With this in mind, last year Facebook began discussions with leading medical institutions, including the American College of Cardiology and the Stanford University School of Medicine, to explore whether scientific research using anonymized Facebook data could help the medical community advance our understanding in this area. This work has not progressed past the planning phase, and we have not received, shared, or analyzed anyone’s data.”

“Last month we decided that we should pause these discussions so we can focus on other important work, including doing a better job of protecting people’s data and being clearer with them about how that data is used in our products and services.”

Facebook has taken only tentative steps into the health sector thus far, such as its campaign to promote organ donation through the social network. It also has a growing “Facebook health” team based in New York that is pitching pharmaceutical companies to invest its ample ad budget into Facebook by targeting users who “liked” a health advocacy page, or fits a certain demographic profile.

SO… I don’t know about you, but this whole thing weirds me out, bigly.

It’s bad enough that the dog food that I just ordered on Chewy.com shows up on my Facebook feed as a suggestion.  That has always bothered me.  It’s Big Brother to the Nth degree, and it bothers me…. but I’ve tolerated it for the most part.

But now with this revelation that Facebook was trying to somehow tap into our medical data… that is just OUTRAGEOUS!!  Apparently nothing whatsoever is sacred anymore… at least not to Facebook.

Meanwhile, Facebook COO Sheryl Sandberg is going around on their apology tour, giving very polished well rehearsed “We’re sorry” explanations.  But the public demands more than that.  After all, it wasn’t just a few people whose data was affected.  It was 87 Million people.  And those 87 Million people who were already pretty upset, are outraged now. 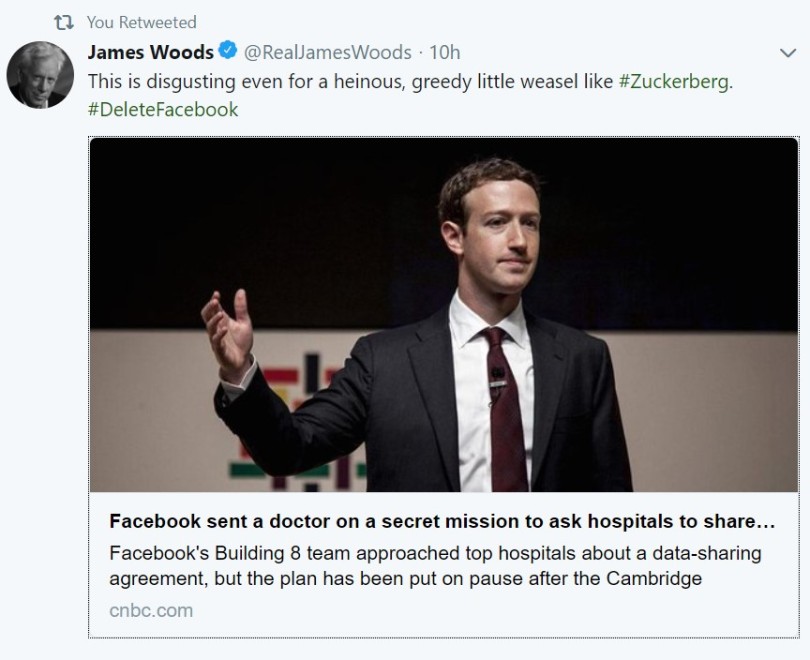