The shooter at the YouTube Headquarters has been identified as Nasim Aghdam, 39, of Southern California.  She used the name Nasime Sabz for her social media accounts, and YouTube channel.

As it turns out, the horrible tragedy at the YouTube headquarters yesterday, might have been avoided if police had listened to Nasim Aghdam’s father.  As a Fox News article states,

The woman suspected of shooting three people at YouTube headquarters in San Bruno, Calif. before killing herself was furious with the company because it had stopped paying her for videos she posted on the platform, her father said late Tuesday.

The police identified the shooter as Nasim Aghdam, 39, of Southern California — and said they had a run-in with her earlier in the day.

Ismail Aghdam said he reported his daughter missing on Monday after she did not answer her phone for two days. He said the family received a call from Mountain View police around 2 a.m. Tuesday saying they found Nasim sleeping in a car.

Nelson said the woman declined to answer further questions but the police spokeswoman did not respond to a question about whether police were warned Aghdam might go to YouTube.

Authorities said they are still probing Aghdam’s motive, and that there are no indications she knew the victims.

In online postings last month, Aghdam alleged that YouTube tries to “censor and suppress people who speak the truth.”

“BE AWARE!” warns a website that reportedly belonged to Aghdam. “Dictatorship exists in all countries but with different tactics! They only care for personal short term profits & do anything to reach their goals.”

The website contains several screenshots purportedly showing Aghdam’s YouTube user account page. The screenshots suggest that at least one of Aghdam’s YouTube accounts had been “de-monetized,” meaning that she was not earning significant revenue from her uploads to the site.

The company “de-monetizes” some channels for reasons including inappropriate material or having fewer than 1,000 subscribers.

Ismail Aghdam, Nasim’s father, told NBC that YouTube “stopped everything and now she has no income.”

Mercury News made a compilation video of some of her work:

Here is another one of her videos, in which she appears to be speaking Farsi:

Here is another one of her videos, in which it is OBVIOUS she suffered from some type of mental illness.  It is a so-called parody of Nicki Minaj:

This appears to be her manifesto, against YouTube censorship: 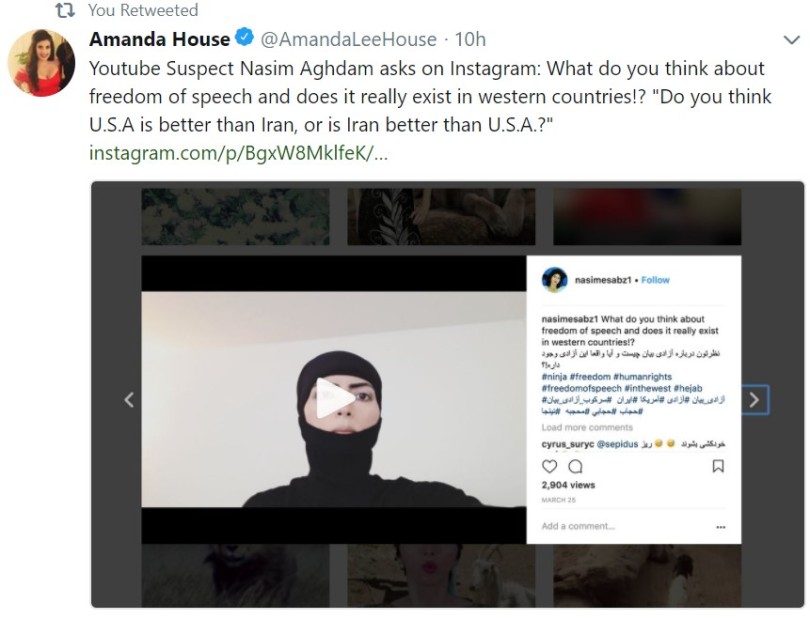 There are a TON of videos that she made – each one more disturbing than the next.   Due to her Iranian heritage, and her broken English, it is hard to tell what language she is speaking in the videos.  CLEARLY, mental illness was at play here, and it went unchecked for a very long time.

The simple fact that she thought her videos were GOOD, and that she deserved to earn a living by making them, speaks volumes about her psychosis.

The lunatic Left is already calling for the ban of handguns now (since it was a handgun used in the shooting, not an AR-15.)  And, of course, let’s not forget to call everyone who is upset about this shooting, an islamophobe…. right? (sigh)