David Hogg, the crisis actor who admitted on tape that he wasn’t even AT Marjory Stoneman Douglas High School during the shootings (you can read more about that in my previous blog) is now targeting Fox News host Laura Ingraham, apparently over one single tweet.

It all started when David Hogg tweeted about his troubles getting accepted to colleges that he applied to. To repeat, HE put it out on Twitter for the world to see, that he was having difficulties getting into colleges.

Then, Laura Ingram put out a tweet of her own about the subject, and cited an article by The Daily Wire who published a story about it: 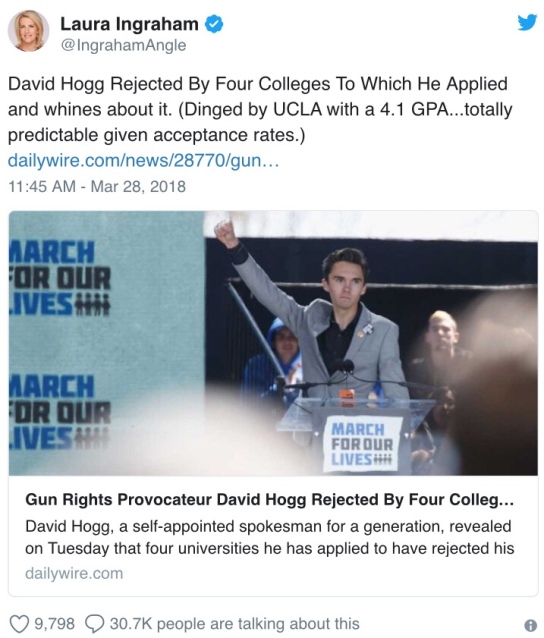 In the true fashion of Millennials who can’t accept any responsibility for their own actions, he lashed out at Laura Ingraham, and decided to go after her advertisers: 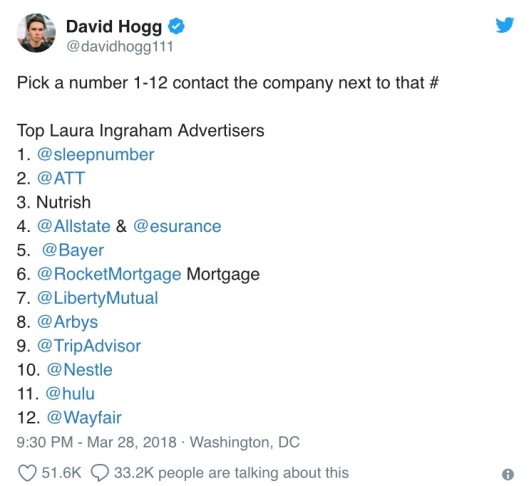 Super mature, right?? It’s the exact tactic that he used when he targeted the NRA, which backfired spectacularly.  But since his little feelings were hurt, and since he didn’t learn his lesson, he’s at it again.

Laura Ingraham is just the latest Fox News host to endure this kind of malicious attack on their advertisers.  Hannity has been bombarded by this nonsense for YEARS, and Tucker Carlson has recently been through similar battles.

It seems that the party of love and acceptance and tolerance, just CAN’T tolerate (or accept, or love) opinions that are different from their own.  They will use violence and threats to silence people, no matter if it is a conservative speaker at a college University, or a highly rated TV show.

Personally, I am going to contact all of her advertisers to show SUPPORT for Laura Ingraham!  And after the little nuisance makers move on to their next shiny object of outrage, I think I’m going to contact Laura’s advertisers AGAIN, to let them know how much I appreciate them sticking with her!

UPDATE:  As of this moment (7pm EST 3/29/18) 4 of Laura Ingraham’s advertisers have bailed, due to the pressure from the loony lefties.

They are:  Trip Advisor, Nestle, Wayfair, and Nutrish