However, for weeks now, rumors have been circling around Twitter (and other social media platforms) that David Hogg isn’t a student at Marjory Stoneman Douglas High School at all… but rather a crisis actor taking full advantage of the horrible and tragic mass shooting event.

The rumors have been non-stop, despite how Twitter and Facebook seem to magically delete posts that question Hogg’s age or identity.  Yearbook photos from Redondo Shores high school in California surfaced, and it appears he graduated from there in 2015.

We have also learned in recent weeks that his father used to work for the FBI, and that his mother is a producer at CNN… which explain why CNN is his favorite network to go on, and how that sham of a Town Hall was thrown together so quickly, with David Hogg at the forefront of it all.

We have also learned that the #MarchForOurLives event, wasn’t a grassroots movement at all, but rather a well funded event put on by George Soros, Planned Parenthood, and many other Democratic donors… including Valerie Jarrett. 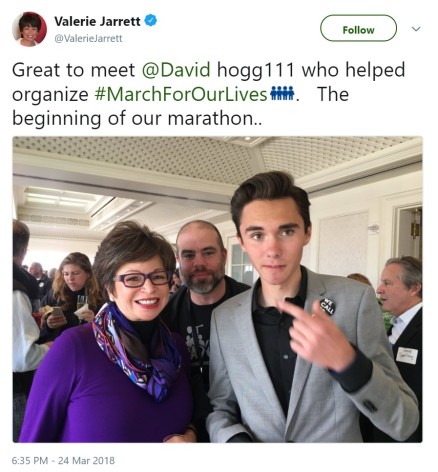 BUT… let’s get back to the horrible events of the mass shooting, and read what David Hogg said immediately after it happened, shall we?  David Hogg was interviewed for a Time Magazine article, and is quoted as saying that he was there at the school:

David Hogg, a senior at Marjory Stoneman Douglas High School, knows what gunshots sound like: His father worked in law enforcement, and taught him about weapons and how to handle them. So when Hogg heard a “pop” while sitting in an AP environmental science class around 2:30 p.m. Wednesday, he told his teacher it sounded strangely like a gunshot. But there had been a fire drill that very morning and talk of a “Code Red” exercise to prepare for an active shooter. This must just be a surprise drill, he reasoned.

And then the fire alarm sounded. Dutifully acting on it, Hogg and other students tried to exit the building. A janitor—Hogg doesn’t know his name but calls him an angel—knew where the shots were coming from and sent the students back. Then a culinary arts teacher, Ashley Kurth, pulled Hogg and others inside, locked the door, and made them hide in a closet. Checking Twitter and Instagram, Hogg—who’s an editor at the school’s TV station—found the news that the shooting was real and ongoing.

The shots continued for what felt like an eternity. Hogg considered the possibility that he would not live to see the end of the day.

“While I was in there, I thought, ‘What impact have I had? What will my story be if I die here?’” Hogg told TIME in the hours following the ordeal. “And the only thing I could think of was, pull out my camera and try telling others. As a student journalist, as an aspiring journalist, that’s all I could think: Get other people’s stories on tape. If we all die, the camera survives, and that’s how we get the message out there, about how we want change to be brought about.”

OK – so that seems credible, right?  I mean, who on earth would use the words “what will my story be if I die here” unless he was THERE, right?  So…. all of that conspiracy stuff about yearbook photos and CNN producer mothers is just nonsense…. right?  Well, not so much.

The truth accidentally slipped out, while filming a CBS documentary entitled “39 days.”  While the documentary has not aired yet, an excerpt posted online by CBS News shows us everything we need to know:  David Hogg wasn’t even there.

You can hear David Hogg admit – in his own words – that he wasn’t at school on the day of the mass shooting (around the 4:30 mark of the video.)

“On the day of the shooting, I got my camera and got on my bike and rode as fast as I could three miles from my house to the school to get as much video and to get as many interviews as I could because I knew that this could not be another mass shooting.”

David Hogg ALSO admitted that he didn’t really know any of the students at that High School, either:

“I didn’t know most of these people at a very personal level, but I wanted to make their voices heard and that’s what I’m really trying to do.”

Sooooo… that’s not good.  Even people who didn’t want to listen to any of the conspiracy stories, have no choice but to scratch their heads now, because the two completely different accounts of what happened, are from David Hogg’s own mouth.  There’s no way for them both to be true.  At least one of the accounts, is a lie (if not both.)

Perhaps he should take a day off from doing interviews at CNN, and learn from one of the best liars out there: 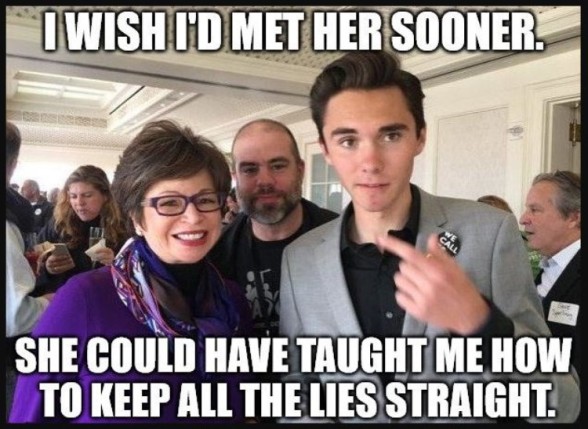