What comes across the most, in my opinion, is that he was OBVIOUSLY very partisan, and biased in his views. Instead of taking responsibility for his actions (the actions that led to the OPR’s recommendation of firing him,) he instead blamed the Trump administration.  For the record, the OPR is an independent office within the FBI itself, not the Trump administration.  Someone as high up as McCabe should know that, right?

Also, given the lengthy response of McCabe, and given that the statement was issued within minutes of AG Jeff Sessions’ statement, it seems it was prepared WELL ahead of time.  Perhaps it was written to rebut and challenge the upcoming IG Horowitz report, and repurposed for the event of his firing?  Hmmm…. 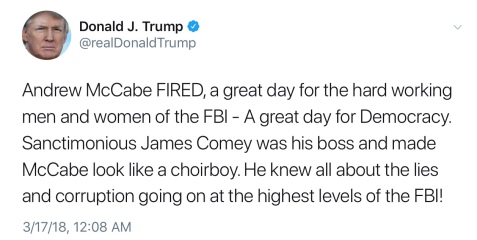 I completely concur, Mr President!  It IS a great day for the hard working men and women of the FBI, and a GREAT DAY for Democracy as well!  Well Said!! 🙂 #MAGA