Sen. Elizabeth Warren (D-MA) just can’t seem to get her own non-Native American poop off of her own shoes… mostly, because she just can’t stop lying.

She earned the nickname Fauxcahontas (or as Trump calls her, Pocahontas) because she lied about being Native American on her applications to both the University of Pennsylvania, and Harvard University… to apparently get a leg up via affirmative action diversity.  (Read more HERE.)  After she was a law professor at Harvard, the Harvard Crimson had her listed as the university’s only tenured minority as a “Native American.” After questions came up about that, she claimed she didn’t know about the Native American listing. (Read more HERE.)

AND… the lies just kept on coming.  In 1984, she contributed to a cook book, called Pow Wow Chow, and submitted recipes that she claimed were handed down to her through her family.  If that’s not bad enough, she PLAGIARIZED the recipes!!!  You would have thought that the cook book’s editor would have thought that a cold crab omelette would be an odd recipe to be handed down through the Native American generations, right?  But it was published… and it turns out it was a word for word recipe from a famous French chef, Henri Soule. (Read more HERE.)  You just can’t make this stuff up, folks!

And just when you think you’ve heard enough… Elizabeth Warren steps in it again.  Yesterday, she brought up her nickname “Pocahontas” at a speech to…. (wait for it)… the National Congress of American Indians!! (Read more HERE.) Apparently she thought she could bring up her Non-Native American heritage, and defend her non-Native American heritage to a bunch of ACTUAL Native Americans??   And just to add more poop to the bottom of her shoe, she tweeted this yesterday as well: 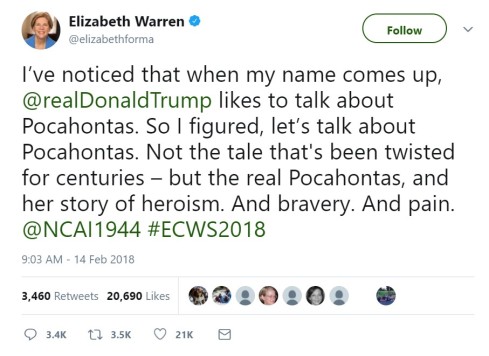 And while we’re at it, let’s see what the descendant of the real Pocahontas has to say about the whole thing, shall we?  It turns out that she is a huge Trump supporter!! As a Daily Caller article wrote,

In a September interview with Sky News, Debbie “White Dove” Porreco said that Trump once asked her if it offended her that he used the name “Pocahontas” to refer to the Democratic senator.

“I know that he uses ‘Pocahontas’ sometimes with Elizabeth Warren,” Porreco explained. “He said, ‘well does that offend you when I use that?’ And I told him no, it doesn’t offend me.”

“If Pocahontas were alive today, she would be very proud of President Trump,” Porreco said. “Just like Pocahontas was a heroine, Donald Trump is going to be our hero.”

So there you go, Senator Warren.  There’s your Pocahontas story… debunked… by an actual descendant of Pocahontas herself.   And she said that MONTHS ago… yet you try to elicit the good name of Pocahontas in a speech to Native Americans yesterday, to… what exactly? Defend your lies about your Native American heritage??  (Just stop.  Seriously.  Stop.  Have some shame, would you?)

And… just to add icing to the bottom of the giant mess on the bottom of Sen. Warren’s shoe… guess WHO is running against her in the midterms this year?  (Insert drum roll please.) The answer is…. an ACTUAL INDIAN!!!  He was born in Bombay, India… which makes him WAY more Indian than Sen. Elizabeth Warren will ever be!! 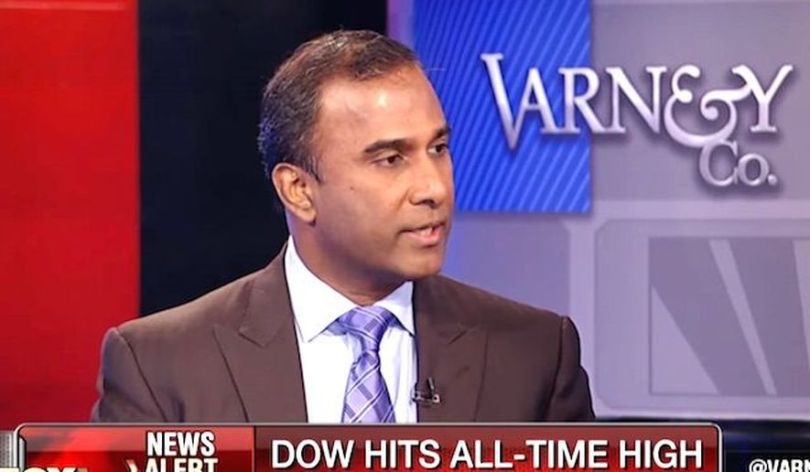 His name is Shiva Ayyadurai, and he is an Indian-American running for the Republican Senate nomination in Massachusetts.  He is an MIT-educated entrepreneur whose claim to fame is being the person who invented email.  According to a Washington Examiner article, citing a Fox Business interview,

“Well, I think only a real Indian can defeat a fake Indian,” he said.

“I sent her a DNA test kit for her birthday, and I was very sad that she returned it,” Ayyadurai added.

So get out your popcorn for the midterms, folks!  Will she finally submit her DNA to quash (or quell) the growing scandal of affirmative action fraud?  What excuse will she come up with next? Hopefully the people of Massachusetts will vote for an ACTUAL Indian, and put that lying cow pie out to pasture!!  🙂